Shortly after I finished studying, a chance encounter with the Dean of Cardiff School of Art and Design sparked a conversation about talent and potential.

Sometimes, I think in all the talk of employment rates and graduate prospects, we get confused about which of those things is the bigger commodity, and how much they rely on each other.

My face, I imagine, would have been the picture of this thought as the Dean 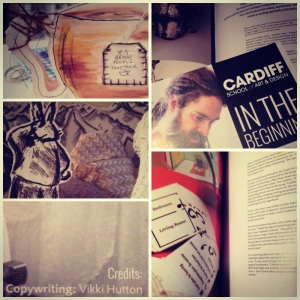 told me about the students working with glass and ceramics and training in illustration.

As great as it sounded, I struggled with cynicism; ‘Where will that get them?’
‘How much good will a degree in that really do?’

I’d forgotten, obviously, how many people had raised the same questions whilst I was training in journalism (an industry, like art, which many people will smugly remind you is struggling without reference to its ongoing presence in their every day lives, if not the scale of its influence on how they interact with and interpret the world round them).

Interviewing close to 20 creatives over the next two
months as part of my first commission post-university, I’m glad I got the chance to challenge my perceptions.

It’s not that I was wrong to ask those initial questions, but misguided that they should be the first to occur to me. I think that’s symptomatic of a wider problem in our general attitudes – when they’re the only questions, as if somehow the most important or the ‘be all and end all’ of the discussion.

In reality, these soon-to-be graduates hesitated no more on the topic of careers and money than any other graduate from any other course at the moment might do.

What about other measures of success? Like happiness; passion; creativity; feeling inspired; challenging yourself; challenging convention; and, somehow, bringing people together, or, I guess equally satisfying for some, dividing opinions?

Whereas cynicism tells us to choose one route or the other, this project introduced me to the people at the centre of the venn diagram between talent and potential.

In their answers – unlike others I’ve heard and tried to avoid giving myself – there were fewer unfinished sentences, and thoughts trailing off to become pipe dreams.

For me, listening, it was like the putting into words of a gut feeling; something not necessarily backed up by evidence yet, but which your better judgment tells you is right. They were constantly coming up with ideas, thinking of ways to push the boundaries, and always, always, considering the bigger picture in ways my initial questions did not.

Sharing their vantage point, it wasn’t about overlooking how important it is to have some kind of plan or to be able to support yourself. It was about capturing the fact that the lucky ones are those who make a living from what they love, not a fortune from losing that feeling, and the really clever ones are those that figure that out early, find their niche, hone their skills and get to decide just how much money they’ll consider as simply a perk of the job.